Trish Ryan is the author of He Loves Me, He Loves Me Not:  A Memoir of Finding Faith, Hope, and Happily Ever After. 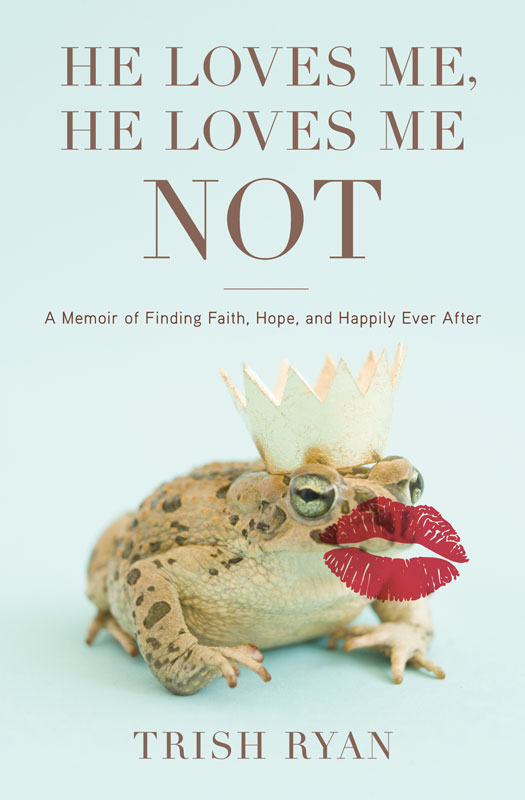 SB:  We all have life stories that set us aside from the crowd, but how did you come to realize that you had a story worth telling?

TR:  The moment that stands out in my memory is a job interview, where the executive I met with said something to the effect of, “You’re not at all qualified for this job, but your resume is so unusual that I just wanted to meet you…”

He’d read books by Marianne Williamson, an author I’d worked for (I call her Jayme Brass in the book), and was curious about how knowing her personally had affected my spirituality. And also, I guess, about how I’d gone from a budding law career, to a year of PhD work in political science, to heading up a left-wing spiritually-based non-profit for a New York Times bestselling author, to applying for a job selling houses…  I think meeting me was some planned entertainment in the middle of his day.

TR:  Yes and no.  I never thought of what I was doing in terms of falling in love with Jesus—it was more like just getting to know him.  But my spiritual life and my romantic life had always been connected, so it seemed natural to describe how the two evolved in tandem.

SB:  How does Mr. Trish deal with having your story made public?  It’s not every guy who gets to be the knight in shining armor in print.

TR:  Steve loves having our story out there.  He takes the knight in shining armor teasing in stride.  At the launch party, someone asked him to sign their book, so that was definitely a fun moment.

SB:  The arts seem to have a great deal of significance in your conversion story.   You mention the music of Avalon and Nichole Nordeman as significant spiritual influences, and the sculpture, Chicken Wire Jesus, helped lead you to a spiritual turning point.  In the memoir, Girl Meets God, Lauren F. Winner says that it was the writing of Jan Karon that first got her interested in Christianity.  What is it that makes the arts so significant in people’s lives, revealing things that tracts and religious propaganda cannot convey?

TR:  Great question!  For me, there’s something about the privacy of art.  I can read a book or think about a song on my own—the author isn’t there to check in to see if I’m “getting it” in a certain way; the songwriter can’t explain to me what she meant.  I think it creates a place for God to speak to me personally, allowing me to work out what it might mean to say yes to his suggestions.  Sometimes it’s nice not to have to have an answer right away, to give things some time and see what emerges.  Art creates that space.

SB:  Your conversion to Christianity is a story of culture clash.  The following passage was very memorable.  “I suspected that a fluffy bouffant hairdo loomed in my future, and I’d probably have to give up my lifelong dream of dancing in a Janet Jackson video.  I’d have to cancel my subscription to the New Yorker, purchase all nineteen volumes of the Left Behind series, and attach an aluminum fish to my car.”  Was your conversion a bit like moving to a foreign country?  Or was it more like acquiring a set of colorful in laws?

TR:  Both, actually.  To be honest, the term “Christian” still feels a bit foreign to me, because it encompasses so many cultural traditions that aren’t part of my experience.  On the flip side, though, it’s been great to watch my worst fears fall away, to learn that Jesus is fine with my straight hair, my subscription to the New Yorker, and our décor-free car.  (We’re still in discussion about the Janet Jackson video … )

As I’ve met people from different parts of the country, I’ve been so encouraged, though; when we get beyond the obvious cultural differences, we’re more alike than different.  We all have hopes and dreams and longings that only the living God can fulfill.  That provides a plenty-big common denominator to fill in the gaps around different political convictions and hairdos.

SB:  The darkest part of your memoir, it seemed to me, was the portion that dealt with your marriage to your ex-husband.  You write about running away from him, moving from location to location to remain safe, and even changing your last name.  While you couldn’t even claim your real name at one point of your life, your story is now very public.   Did you ever consider publishing your story as a novel, so as not to disturb the ghosts of the past?  Or did you embrace the ability to share your story honestly from the very beginning?

TR:  My agent and I briefly considered publishing as a novel, but strangely enough, it didn’t work.  It just sounds too cliché: girl searches for the right guy, messes everything up, finds the right God, then lives happily ever after.  If it hadn’t actually happened, it would sound too good to be true.  So we decided to stick with memoir.

On a practical level, there were many meetings with my publisher’s legal team to make sure nothing I said could justify a lawsuit.  My last name is different now, so that gives me a certain degree of anonymity. And Steve came with me on certain book tour stops where there might be an unfortunate run-in.  I’m happy to report that he’s never needed to jump into the bodyguard role!

SB:  Do you write in other genres?  If so, how is memoir more challenging and/or more straightforward than writing fiction or poetry?

TR:  I have such respect for fiction writers.  Someday I might be brave enough to try and create an entire story from my imagination, but I’m not yet brave enough.  The great thing about memoir is that it provides boundaries—it’s helpful to know where you’re going, and what material you have to work with!

I’ve never written poetry, but I’ve been toying with song lyrics lately, which seems similar.  I think it’s the boundaries thing again—the challenge of conveying something with only a few words and a chorus appeals to me.

SB:  Who are the writers who influence you?  Or that you admire?

I love how Anne Lamott weaves the past, present, and her hopes for the future.   Elizabeth Gilbert does metaphor better than anyone I’ve ever read.  My brain doesn’t usually see things that way, but reading her book reminds me to try.  AJ Jacobs shows me how you can dive into something—reading the Encyclopedia, obeying every rule in the Bible—with both humor and an honest sense of searching.  Heather King is simply an amazing, beautiful writer.  Cathleen Falsani shows me that it’s okay to be “left leaning for Jesus,” and encourages me to be honest about who and where I am, even when the subject matter is controversial.

This week, I’m a little obsessed with Barbara Kingsolver.  I love that she crosses genres—fiction, narrative non-fiction, essay, memoir.  I aspire to that level of dexterity as a writer; I think it’s a sign that you’ve really mastered the craft.

SB:  You’ve held an interesting array of jobs from being a lawyer to working in real estate to being a New Age inspirational speaker.  How did this prepare you to be writer?

TR:  I have a theory that lawyers make great writers because the job provides such incredible material about people coping with unthinkable circumstances.  And on a practical level, many of us went to law school because we thought our writing and/or speaking skills would be valuable, only to realize later that it’s the engineers of the world who really excel in law.  So writing gives us an outlet for creativity that gets stifled when you’re trying to bill your days in six-minute increments.

SB:  What advice would you give to new or unpublished writers?

TR:I wish I had something new or unique to say!  Here are three things that have been helpful to me:

1. Just write—get the story down in proposal form so you’re ready to move when an agent is interested.

2. Learn about the business. There are incredible blogs by agents and editors online, so it’s easier than ever before to understand the competing interests in publishing.  There’s a temptation to think, “Oh, but that won’t apply to me…” Resist it. Presume all the rules apply to you.

3. Be teachable.  The final version of He Loves Me, He Loves Me Not looks almost nothing like the manuscript I first turned in.  Several editors revised, reorganized, and suggested significant cuts, and sometimes that hurt.  But the results are so much better than I would have come up with on my own.  When I wrestled my pride into submission, I was able to see what an honor it was to have these people lending their considerable talents to my story.

Thank you, Trish, for taking the time to talk to us at Halfway Down the Stairs.

Stacy Wennstrom is a nonfiction editor at Halfway Down the Stairs.