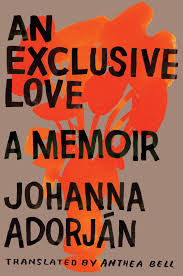 When Johanna Adorján was twenty years old, her grandparents committed double suicide in their home.  Few of the couple’s friends knew of the time István, known as Pista to his friends, spent in a concentration camp or of the couple’s flight from Hungary.  They were only allowed to see the surface: the orthopedic surgeon with a slightly bawdy sense of humor and his amusing and elegant wife, a charming couple who loved to attend classical music concerts.  Even Pista and Vera’s children and grandchildren were kept ignorant of the darker years in the family history.  If anyone tried to speak of Pista’s time in the concentration camp, they were simply told, “We don’t talk about that.”

Years later, Ms. Adorján sought to learn more about the things that the Adorjáns were never permitted to discuss.  Travelling to Copenhagen, Budapest, and Paris, she interviewed her grandparents’ friends and she also visited the former concentration camp at Mauthausen.  She learned of her grandmother’s schoolgirl days, of how her grandfather had to learn how to sleep on his feet at Mauthausen to avoid being shot, and how her grandmother hid her infant father in a drawer during the last year of World War II.

The memoir contains the results of her interviews and her own reflections on her grandparents, and her investigations are intertwined with a fictional account of her grandparents’ last day, where Ms. Adorján speculates on what Pista and Vera may have done or talked about.  Even as Ms. Adorján sought to understand her grandparents through her research, she also sought to understand herself.  As a woman who took after her grandmother in looks and personality, the unanswered questions were doubly personal.  Pista was dying of a terminal illness at the time of the suicide, while Vera was a healthy woman of seventy-one.

An Exclusive Love is a fascinating memoir.    Adorján’s writing is honest, and she tells an emotional and remarkable story without hitting any clichéd or sentimental notes.  It does feel slightly unsatisfying at the end, as there is so much that is left unknown, but that is part of what gives this memoir its honesty.  By leaving the reader with questions, as Adorján will go through her life with unanswered questions, the reader is left haunted and mourning for this strong and fascinating couple who endured so much in their lifetimes, and ultimately decided to end things on their own terms.

Stacy Wennstrom is a nonfiction editor at Halfway Down the Stairs.