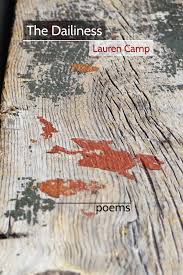 The Dailiness is Lauren Camp’s second collection of poetry, following This Business of Wisdom published in 2010. Camp is an accomplished visual and audio artist and the convergence of these forms is evident in the poems. Strikingly visual and lyrically thoughtful, The Dailiness breathes with an empathetic warmth and an unblinking eye.

The Dailiness weaves together the minute details of everyday life with the larger stories that surround us. Beginning with the first poem, ‘Looking Around These Days’ Camp links a domestic infestation of ants to the daily occurrences of traffic, illness, anxiety, weather. It is this acute investigation of the ordinary that surrounds us that makes this collection at once familiar and intriguing.

Camp builds swift, beautiful images such as “the dark steam of each day lifting/from the flat table of tar” from ‘Girl on a Bus, and “our village lies below/in a filigree of light; and a dried coyote jaw/exposes teeth gnawed by time, its elastic cry expired” from ‘Atonement.’

Her work in audio and as a voice over artist is evident in her line breaks and use of rhyme. Upon first read, Camp’s shift in line breaks is disconcerting. In several poems such as ‘Rail Runner Express Crash on I-25 South of Santa Fe,’ ‘Drama Class 1989’, and ‘And Now You Would’ stanzas shift between three lines, then two and back again. Reading with the eye the work looks uneven or unplanned. However, the effect is very deliberate.

“Part of my revision process involves leaving the poem alone for a period of months,” Camp says. “When I come back to it, if I can’t read it aloud without tripping up, I consider that the reader will also likely stumble. At that point, I don’t care to be true to the form I may have started (couplets, tercets, quatrains). I want to communicate. That’s much more important to me.”

Camp’s intelligent use of alliteration creates a musicality, particularly in lines like this:
“His lickerish last words lingered, though/she kept deleting all the letters, letting them/cool, laying them bare” from ‘That Unsafe Place’ or this from ‘How I’d Explain What Kind of Mother She Was’:
“if I just don’t remember the Kool-aid or kisses, like a sieve/letting go of the sand but keeping the stones.”

Reading the poems aloud with the intended breaks and pauses adds an openness and space to the work that might be missed if read only with the eye.

Thoughtfully arranged, The Dailiness is divided into three sections. The first is rooted in the present and everyday while looking backward to the past. The second section of the book, what feels like the elemental core, is an examination of grief, particularly the loss of the poet’s mother. Camp incorporates the backdrop of grief into the day-to-day business of living, and it is this truth, that death and mourning and loss are as ordinary as ants and sunshine and trees that forms the core of the work. The third section seeks to look outward and is an exploration of geography and a loosening of form. It feels as though it is a release or moving forward from the visceral mourning and grief that is the heart of the work. There is a natural ease of movement in the order of the poems. The reader begins in an ordinary place and is slowly guided on a tour through the past and then organically shifted to a future of many possibilities. Although grief is at the heart of the work it is by no means morbid, nor is it banally uplifting. It is a rooted, measured examination of the way in which our emotions inhabit us as we inhabit the world.

Roxanna Bennett lives and works on the outskirts of Toronto as a freelance writer and artist educator. Her work has appeared in a long list of publications and has been rejected by an even longer list of publications. She shamelessly reads comic books and has lots of great ideas for changing the heroic policy of not killing villains. Roxanna cannot do math of any kind nor does she know the difference between Imperial and metric measurements. Being Canadian, she writes words with an excessive number of vowels that American word processors maddeningly refuse to recognize as correct. Her first book of poetry ‘The Uncertainty Principle’ is out now from Tightrope Books.