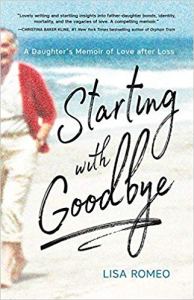 Published by University of Nevada Press, 2018

Lisa Romeo’s 2018 memoir, Starting with Goodbye (University of Nevada Press), begins with the death of her father, a man who dropped out of school to support his family and became a successful polyester manufacturer in the nineteen-fifties and sixties. He retired to Las Vegas and, after years of building his dream house with his wife and venturing into real estate with his son, succumbed to complications related to a stroke and Alzheimer’s at the age of seventy-nine.

Romeo’s story threads together three main themes: the raw and concrete logistics of those first days, weeks, months and years after a parent dies; the fragility and strength of sibling relationships; and how we come to know ourselves by taking the time to better understand our parents’ histories.

When the author’s elderly father is hospitalized, Romeo and her older brother and sister, along with their mother, must work through medical decisions, sitting at their father’s bedside trying to humor his belief that he is staying against his will at an incompetent hotel. After he dies, there is his cremation to oversee and the eulogy to write, and then the sharing of care for their mother who has depended on her husband for financial and emotional support throughout the many decades of their long marriage. The author’s brother lives locally in Las Vegas, while Romeo and her sister both fly back and forth from the East Coast for weeks at a time. Romeo’s work on her MFA is put on hold while she keeps her mother company, shopping and playing slot machines, and she misses her elementary-aged children and husband back in New Jersey.

Romeo, who was a 2013 contributor to Halfway Down the Stairs (Eyes, Hands, Hotel, Hospital),  writes of these experiences with an honesty and open self-reflection that welcome the reader into her world and memories. She questions her own actions and feelings along with those of her family and friends, all the while searching for a new homeostasis without her father. It is with such openness to understanding her path forward that the author moves in and out of the past, and brings her deceased father with her into the world from which he has departed, finding him sitting in her office or in her car and often interested in talking. His visitations are both a comfort and also not enough. In one of the loveliest lines in the memoir, Romeo writes,

I want to ask the father who lived in this world, who rubbed his gnarled hands at the dinner table and massaged his knees in the car, not the dead father who comes to visit and is mostly upbeat and positive and who is probably all in my mind…. I want the real thing.

I remember how comforting it was to listen to other people’s experiences of loss after my own mother died at the age of sixty-four. Romeo’s memoir is one of these shared stories. She opens up her heart to her father, her family, the reader and herself. She writes that the act of creating this memoir was, in part, to know her father better. In doing so, it’s clear to readers that she has also come to know herself better. And this is a story any of us having experienced loss can take comfort in.

Milena Nigam is a nonfiction editor at Halfway Down the Stairs.